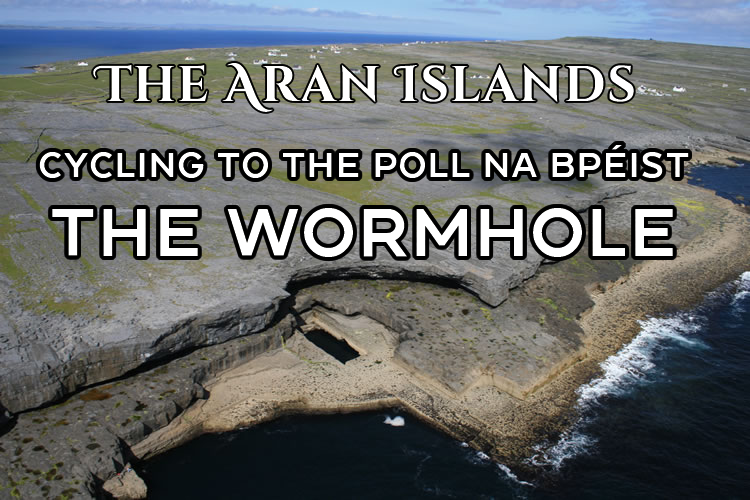 The Wormhole, or Poll na bPéist, is a natural rectangular pool located by the Western Cliffs of Inis Mór, approximately 1.6 km east of the breathtaking fort of Dún Aonghasa. The rock pool is linked to the sea through a series of underground channels, which causes it to fill and empty in accordance with the ocean’s tides.

A totally natural phenomenon, it is thought to be about 150 feet deep and 50 feet wide. Along with Dún Aonghasa, it is one of Inis Mór’s most visited tourist attractions, and its reputation has only grown since it has been selected as a regular host of the Red Bull Cliff Diving World Series

Cycling is the most popular way to explore the island, and the same goes for those hoping to catch a glimpse of Poll na bPéist. The Wormhole is located 5km from Kilronan Village and the journey takes approximately 35-50 minutes each way. Visitors cycle the first leg of the journey to Gort na gCapall, and then reach the pool itself on foot. The journey on foot takes around 15 minutes each way.

Map of How to get to the Worm Hole

The walking leg of the journey involves walking across large expanses of exposed stone, loose rock and rock pools, so visitors are advised to wear footwear suitable for outdoor pursuits and to be mindful with their feet. It is also not a journey recommended for elderly visitors or those with reduced mobility.

Getting to The Worm hole from Aran Bike Hire

After renting your bicycle at Aran Bike Hire in Kilronan Village (Kilronan Pier, Kilronan), head west out of Kilronan Village, following the signage towards Dún Aonghasa and Poll na bPéist.

On your way out of the village, make a quick pitstop at Powell’s Spar to stock up on some snacks for the trip out West. Keep straight until you come to Tí Joe Watty’s Bar and Seafood Restaurant, keeping an eye out for the Craggy Island Tourist Office on the right hand side.

From this point, there are two possible routes to the Wormhole: tourists can either head straight and continue on the Main Road (the High Road) or alternatively, they can take a right turn down onto the Low Road, the island’s main tourist route. Both routes link up at both ends, forming the Ring of Aran cycle route.

Getting to The Worm hole Via the High Road

Heading straight will take visitors on the High Road, the main road that cuts through most of the island and services many of the island’s villages (Mainistir, Eochaill, Ballanacregga, Gort na gCapall).

Taking the High Road involves a steady uphill incline, followed by a gradual descent, joining up with the Low Road at Kilmurvey Beach, the island’s only Blue Flag beach. As it is the island’s main road, the road is surfaced and makes for a smooth and even cycle.

Along the way, take a break and stop off at Dún Eochla, another stone fort located almost in the very centre of the island. Taking its name from the nearby village of Eochaill, it is thought to have been built sometime after the better known Dún Aonghasa.

Close by Dún Eochla, visitors will also find the remains of a lighthouse that was built by the British on Inis Mór during the 19th Century.

As the High road descends towards Kilmurvey beach, there is a left hand turn towards the village of Gort na gCapall, indicated by a stone sign, as well as a sign indicating it as the turn off for the Wormhole.

To reach Dún Aonghasa via the High Road, continue on past Kilmurvey beach and turn up past the graveyard, following the stone signage for the stone fort, whose entrance and attached visitor centre are located in Kilmurvey Village.

Getting to The Worm Hole Via the Low Road *easier passage

Taking the right hand turn off at Tigh Joe Watty’s , visitors will find themselves on the Low Road, which is indicated by a sign for Dún Aonghasa via the Seal Colony.

This route links Kilronan Village with Kilmurvey and the Western parts of the island. The cycle is much more flat, with a small number of gentle inclines and declines, with a constant view of the ocean.

It is the main tourist route on the island, taking you the scenic route along the coast, with views of Clare and the Burren on clear days.

The Low Road’s surface is more similar to that of a boreen, less smooth and also smaller in width. This road can get busy during the summer, especially during the hours of 12 and 4, so it is important to regard the safety of other cyclists.

Like the High Road, this route offers visitors to the island the chance to experience its other attractions. Stop at Port Mainistir, turning left up a small hill to Teampall Chiaráin, a 12th century church said to be founded by St Ciarán of Clonmacnoise.

Take a tour of the Aran Goat’s Cheese Factory and Shop and stop off at the Seal Colony, located about 10 minutes before Kilmurvey Beach on the right hand side.

The Low Road also has regular markers along its route, indicating your current distance from attractions such as Poll na bPéist and the village of Kilmurvey, which are a good time-keeping tool to ensure tourists do not miss their ferry departure.

The Low Road joins up with the High road at Kilmurvey Beach. To reach the turn off for Gort na gCapall, turn left onto the High Road and cycle as far as the stone sign indicating the village’s entrance, and turn right here.

From the sign at Gort na gCapall, continue straight for about 5 minutes until you come to a fork in the road.

Keep right, passing a white house on the right hand side, and then take a sharp right (sign here?) Follow this boreen until you come to a dead end and a gate. At this point, visitors leave their bikes and do the rest of the journey on foot.

Walking out to the Wormhole from this point, there is no one defined route, but there are red arrows that indicate the general direction to take.

The surface is uneven and varied, large slabs of limestone that change to loose boulders and stones, then to rock pools and seaweed, so visitors are urged to be careful. To arrive at the pool at ground level, keep straight and follow the arrows, but to view the pool from above, keep right.

Swimming in Poll na bPéist is extremely popular with tourists that come to visit the island, particularly during the summer months. It especially attracts divers, due to its Red Bull Cliff Diving status, and while many visit the island just to experience a swim in the wormhole, locals still advise against it, as it can be very dangerous.

Swimmers are urged to only swim at very high tide on calm days, and if at all possible, not to swim at all. They are also urged to jump in from ground level, as diving from the cliff can lead to serious injury, especially when the tide is low.

Swimmers also need to be aware that the Wormhole is not manned by a lifeguard, and if a swimmer gets into difficulty or gets injured, emergency services must be called.

On the way back, visitors once again have the option of taking the High or the Low Road back to Kilronan Village. Make sure to give yourself plenty of time to get back, giving yourself time to return your bike and make your ferry home.